Within the Chancel, the communion table, chair and Prayer Desks, together with the chair and kneeler tapestries, were all gifted to the Church,

Also gifted, was the wooden Cross which forms a focal point within the Chancel. When the Chancel is lit, the Cross casts two shadows, reminding everyone of the three crosses that stood on Calvary’s Hill.

The Chancel was re-arranged within a fabric scheme to celebrate the centenary of the present building on 24th March, 1987. 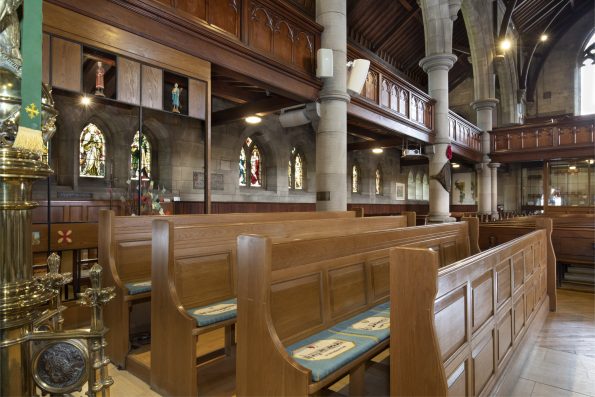 s the generosity of two other members of the congregation which made this re-arrangement possible, along with the provision of new choir stalls which brought the organist and choir out of the Chancel and into the body of the Kirk.

The Choirstall Cushions were crafted by a small group of dedicated local women who spent two years working on the project
.
There are six cushions, each measuring 147 inches long and each with seven places to correspond with the seven panels on the back of the stalls, making forty-two places in all. 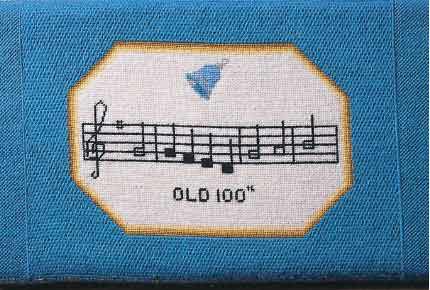 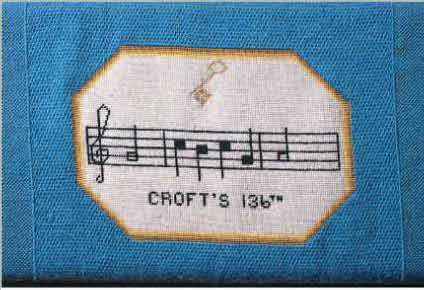 The design, which is original, is composed of a stave with the treble clef, the opening phrase of a psalm being stitched on the stave. Each place shows a different psalm. The design is enclosed in a frame, shaded from brown to gold and the name of the psalm is stitched below a Christian symbol shown above the stave.

These symbols echo those to be seen on the copper screens at the entrance to the church. There is a white background within the frame and the remainder of the cushion is sky blue. Inscribed on the back of the cushions are the date sewing commenced, 13.10.94 the date the sewing was completed, 30.11.96 and the initials of the needlewomen.