The church was built in the l3th century Gothic style. Its architect, William Young of London, was nothing if not catholic in his commissions, for he also designed such contrasting buildings as the Municipal Buildings in Glasgow and what was the War Office in Whitehall, London.

Today’s church, with its fine crown spire, dominates the High Street and it is from there that the crow-stepped gable can be seen to full effect. The building has a number of links with previous buildings, including the sculptured Coat of Arms of the Burgh which is built into the east elevation of the tower, while above this, is the clock taken from the earlier building. 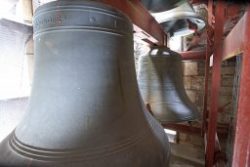 Higher still, the ancient bells from two earlier buildings were re-cast into one great bell which now hangs in the belfry of the present building.